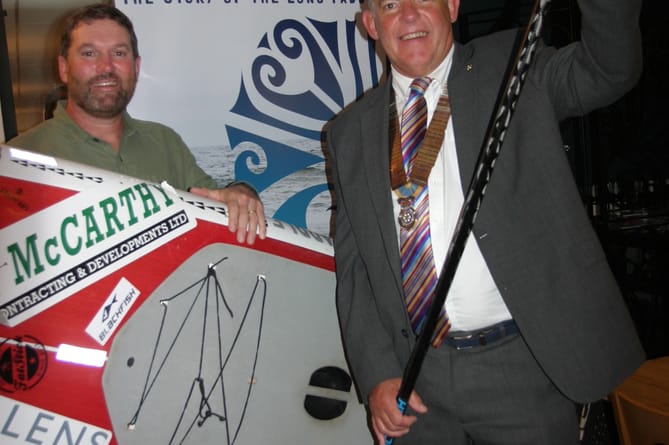 NICK Hindmarsh, President of the Rotary Club of Dartmouth, held his President’s Night at Stoke Lodge Hotel, Stoke Fleming, with club members, their partners and guests – the first such event since the pandemic.

Nick paid tribute to the support he’d received from the club and its members during his presidential year. A three-course meal was followed by an engaging speech from sea safety campaigner Brendon Prince - the first person to circumnavigate mainland Britain on a paddleboard.

Brendon Prince, aged 48, set off from Torquay, Devon, on last April and arrived back in his hometown last September, having completed the 2,500 mile (4,203km) challenge in 141 days. He was welcomed home by a flotilla of fellow paddleboarders who escorted the father-of-three ashore.

He told the Rotary audience: "I think you have to have a massive motivation, and, for me, it’s all about water safety."

Brendon was an off-duty lifeguard at Mawgan Porth beach in north Cornwall in October 2014 when three people drowned. He pulled two people from the water but was unable to save their lives. Seeing the impact of the deaths on the victims’ families drove Brendon to set up the Above Water charity, which teaches children about water safety and added that the incident was also the motivation behind the challenge. He said he wanted water safety to be taught to children annually in schools.

President Nick Hindmarsh said, “I was delighted so many people were able to join us on the evening of my President’s Night. It was good to once again get so many members of club and their partners together for a relaxed social evening, especially after the two years prior to my year as Rotary President.”

“It was sad a number of members could not make it due to health issues and we wish them all well in their recovery. I was delighted we could be joined by Brendon Prince, the famous circumnavigating paddleboard star from Torbay. His story was both fascinating, uplifting and inspirational. It was notable how many people stayed back to speak to Brendon about his exploits. I’ve heard since the evening that he was impressed with the interest and the offer of support for him as he takes his charitable work forward. Personally, I was impressed by his simple three-word mantra of ‘stop, look and listen’.”