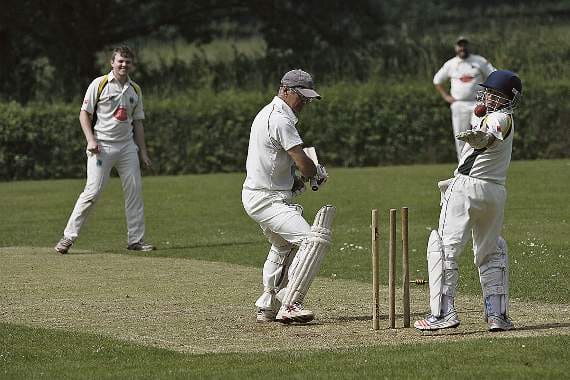 Revenge is sweet for D and T against the Corns

D and T stroll to victory

It was top versus bottom at Foxhole on Saturday. Ashburton had a 100 per cent record, while D and T were looking for their first win of the season.

Despite the gulf in their relative league positions, there was very little between the teams as Ashes won with just over an over to spare in an exciting and competitive match.

Ashburton won the toss and put the home team in to bat. Dismissed for 80 the previous week, D and T scored 91 before losing a wicket.

Paul Taylor and Gavin Colegate got D and T off to a fine start on a good batting pitch. Taylor sustained an elbow injury while hitting a four and, though he bravely carried on, finally had to throw in the towel and retire hurt.

Joe Parker joined Colegate and was soon striking the ball well. With 15 overs remaining Colegate was out for a solid 39, trying to up the run rate. New man Tom Petherick lasted only two balls before Russ Lacey took the first of his four wickets (4-28) when Petherick was adjudged lbw, despite being a good way down the track.

Lacey then bowled Keith Hodgins and Parker for five and 23 respectively and then had Sam Tanner caught for three as D and T collapsed to 126 for 5 with eight overs remaining.

James Hartridge was unable to stop the rot, falling to Bartram for four, but Glenn Colegate and Phil Power put on a useful 21 runs for the seventh wicket before Power was bowled by spinner Churchill, who also bamboozled Steve Mudge. D and T closed on 169, with Colegate 12 not out and Rusling six not out, a total which seemed to be about 20 runs below par, and so it was to prove.

After a fine tea Ashburton got off to a flying start scoring at five an over, with seasoned campaigner Marcus West and young Devon player Jake Pascoe in fine form.

With only one fit pace bowler in the team, spinner Petherick spearheaded the D and T attack with Mudge. Searching for control, skipper Gavin Colegate, soon brought his brother Glenn and Mick Rusling into the attack.

The pair have a long history of exerting a stranglehold in the middle of an innings.

On this occasion Colegate (2 for 44), perhaps distracted by his birthday, began in wayward fashion but his birthday improved as he trapped Pascoe lbw for 19 with the score on 70 after only 12 overs. He then had Lacey lbw for 22.

West (51) completed his half century but was visibly tiring. Gavin Colegate found the edge of his bat as Mudge took a fine high catch at slip- 116 for 3 with 15 overs remaining to score 54 runs. The match was poised on a knife edge but D and T needed wickets. Gavin trapped Jack Churchill lbw for 11 and Power bowled Lambert for 17 and Higgs for 6.

Power bowled with great variation and was the pick of D and T’s bowlers. He might have taken a ‘five-for’ but had abysmal luck, with four straightforward catches dropped off his bowling. Andy Harvey and Tom Rush eventually saw Ashes home, with Harvey finishing it in fine style with a huge six.

Dartington and Totnes first XI snatched victory from the jaws of defeat with a thrilling one-wicket victory over Shaldon in a high-scoring contest at the Hazeldown Oval.

Shaldon batted first on a good surface but D and T struck an early blow when opener Andy Lockyer was bowled by Nick Dennis for five. New man Dan Woolnough and William Moore set about launching the Shaldon innings after their early loss.

Both batsmen played some classy strokes and took the score to 84 when Woolnough was bowled by Ben Hartridge for 30.

Shaldon captain Todd Ballman continued his side’s positive approach. He and Moore added 46 for the third wicket before Ballman was bowled by the off spin of Chris Cook for 27.

Soon after Moore was dismissed for 58 to become Cook’s second wicket and Ryan Bougourd was run out by Harry Baxendale without facing a ball to leave Shaldon on 165-5.

Karl Blackburn took the attack to the bowlers, striking 49 from 28 balls, putting on 31 for the sixth wicket with Richard Fisher.

Fisher became Tyler Walton’s first wicket when he was caught by Charlie Nicholls for eight, leading to a batting collapse where the final four wickets fell for 26 runs. Blackburn eventually tried to play one big shot too many and was caught at long-on by Hartridge from Walton.

Mark Jameson was bowled by Walton without scoring, and Carl Woolnough was caught by Josh Orrall for two. The final wicket fell when last man Ross Abraham became Walton’s fourth wicket and Hartridge’s third catch when he was dismissed for four.

D and T had fought back well to restrict Shaldon to 222 all out on a good batting surface but a challenging chase lie ahead.

D and T got off to the worst possible start when the top three of Josh Orrall, Matt Sevior and Andy Bligh all found themselves back in the pavilion with only seven runs on the board. They had all been dismissed by the dangerous Ryan Bougourd.

Chris Cook and Harry Baxendale set about rebuilding the D and T innings, batting sensibly to take the score to 69 before Baxendale was bowled by William Moore for 26.

Cook and new man Charlie Nicholls added another 62 for the fifth wicket with Nicholls playing some powerful strokes. The score had reached 131 when Nicholls was caught and bowled by Carl Woolnough for 23.

Cook, who had looked untroubled in marching to 78, was eventually undone by a skilful piece of bowling to become Bougourd’s fourth wicket.

It was a crucial innings, with Cook rescuing his side and taking the game to the Shaldon bowlers.

The score had risen to 168 when the seventh wicket fell. Trying to accelerate the run rate, ‘keeper Alex Winch was caught by Blackburn on the long-on boundary off the bowling of Moore for 15. Soon after, Walton was bowled by Abraham for four and three wickets had fallen in quick succession when D and T captain Harold Stevenson was LBW for two.

The score was now 173-9 and D and T were still 50 runs short of victory with the last two men at the crease. What happened next was extraordinary.

Ben Hartridge and Nick Dennis ran hard and punished any loose bowling, putting pressure back on the Shaldon bowlers.

The pressure eventually told when an easy run out chance was missed.

The target steadily reduced and huge sixes from each batsman took the target to just seven runs off the final over. After a single was taken off the first ball, Dennis launched the ball high and far over the boundary to spark jubilant scenes among the D and T players.

It was a remarkable victory, a fine team effort with particular credit due to Chris Cook, Nick Dennis and Ben Hartridge.

Played in a great spirit, both teams agreed it was one of the best games in which they had played.

D and T are involved in a local derby double header next weekend against Kingsbridge, with the first team at home and the second team away.